In a previous blog post, I denounced the overuse and misuse of the GDP and CPI indicators. 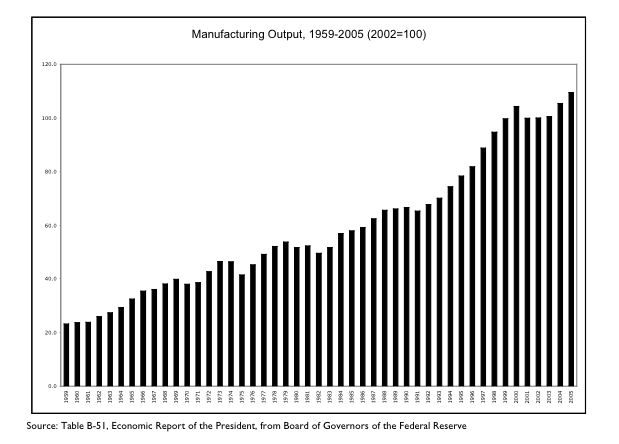 My criticism is simple and harsh: these indices do not convey useful, objective information about the real world. There is no reasonable way to mash together numbers with different units – such as tons of steel forged, silicon chips fabricated, and automobiles assembled – in order to get a single number that conveys meaning. The process of doing so actually destroys information. If I had the raw numbers about steel or car production, that would tell me something about the world. But if I combine them into one number – what does that number mean? What does it tell me about the world?

I am not anti-model nor anti-math. But for a model to be useful it must either a) be proven to be predictive or b) useful as an aid in reasoning and understanding. For the latter, as a test of whether a change in a model says something meaningful and useful about the real world, one can ask how a given change in the real world would affect the numbers coming out of the model. If the model is useful, it should be possible to calculate an answer. For instance, an expert in baseball statistics could tell me how a given pitcher’s FIP, WAR or PECOTA would change in result to a set of real world baseball game box scores.

So here is a set of questions for people who cite the manufacturing and productivity indices. Please cite official documentation when answering these questions:

1) At time A, the U.S. makes all of its CPUs internally. It makes 100 million CPUs a year. At time B, most of the CPUs fabs have been shipped overseas. It now only makes 10 million CPUs. But, these CPUs now have 20 times as many transistors, and operate at 2000MHZ instead of 500MHZ. How much has manufacturing output increased or decreased according to the government indices?

2) A bank replaces five bank tellers with an ATM machine. The ATM machine is built in China, using 100-man-years of labor. It will last for ten years. How much has labor productivity gone up or down in the United States, according to the official indices?

Note that in both scenario 1) and 4), a reasonable person would say that these are instances of the U.S. economy hollowing out. Yes, in case #1 the net total number of transistors being produced in the U.S. may have gone up. But the bottom line is that the U.S. went from making its own CPUs to importing its CPUs. America has gone from building stuff to importing stuff. Yet these cases, I have no idea if that “hollowing out” would be captured in the manufacturing indices. And you do not know either. And neither do the people who cite these statistics and say, “look the economy is not hollowing out, these charts prove it.” Thus the people who cite these amalgamated statistics are not contributing to the conversation, they are just adding noise.

The entire process of figuring out how the world works is a process of refining complex data into simple understandable models, and then building more complex models on top of those simple models. If you start from a model that nobody understands and that has no predictive ability, then you have just destroyed your ability to think. You are starting from nonsense.

And in fact, there is no objective way to calculate these numbers. These indices suffer from the same defects that afflict GDP and the CPI (see my criticism here). There is no mathematically sound way to combine multiple numbers that have different units. To do so is to turn mathematics into nonsense. Thus what actually happens is the statisticians constructing these numbers just invent various rationales for how to compare the dollar values of these goods over time, and then fudge and fix things until the numbers look somewhat plausible. The end result is equivalent to simply surveying a sample of government economists and just asking them to estimate, “How much more productive is the United States today than it was 30 years ago?” This whole process just disguises a survey as being an objective calculation.

My plea going forward is that if you want to discuss manufacturing or productivity, talk about objective numbers that are comparable across time. Talk about the actual tons of steel forged in the U.S., or the actual number of automobile engine blocks produced.